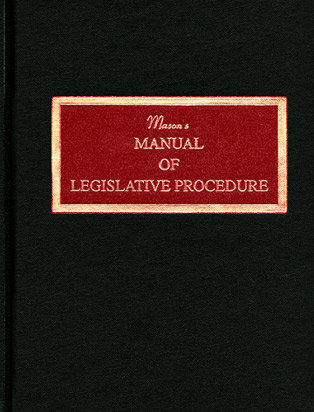 The procedures of the body are governed by the rules of the body (approved by 2/3rds of the body), and when they are unclear, Mason’s Manual. But things go along and most legislators learn from their mistakes, or when something happens that seems out of place. I can remember hearing the Majority Leader ask for the Senate to go “at ease”  hundreds of times, but when I asked for such in my final senate year, I forgot to include in the request that unanimous consent be granted. After, he politely underlined a part of Rule 43: Senate at Ease. — (B) The Senate may be called “at ease” only with consent of the Senate. Rules, words matter.

Please God, forgive my ignorance
Of Senate Rules and Masons Manual
And know I will study and learn
As I should, oh Lord.

Dear God
Do not let my ignorance harm
The work I do for justice
Nor my constituents or
The state I serve.

Dear God
Let the overriding purpose
Be greater than the rules
We all should know and work with
But so often fall short.

Dear God
We know the rules are meant
To preserve my voice, not stifle
Honest meaningful discourse
And should be used as such.

Dear God
Simple rules serve simple goals
And ours here should be simple
Though You know and I know
Many times it is not so.

A Family physician, former county coroner and former Idaho State Senator
View all posts by ddxdx →
This entry was posted in Senate Prayers. Bookmark the permalink.