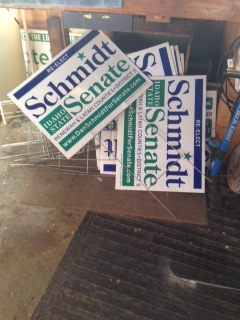 these are easy, not so the big ones

The morning after the election I drove my little pickup around to pull the signs I had pounded in and wired up weeks before. The results were just now sinking in; I had won, but I had a deep sense of dissatisfaction. I was not concerned with the new balance in the US Senate; the state-wide races here in Idaho were a much nearer bother, but the precinct-level results in my district, the voters I had tried to touch were my greatest trouble.

We had focused a lot of time in rural precincts to persuade voters of my ability to give them good representation in the Idaho Senate. But the results were not impressive. In fact, they looked about the same as 2012 just with a very poor turnout. So I was pulling signs with frustration in my ability to sell voters on my qualifications.

You might get a sense of my personality here. When I would see patients all day in the office, maybe five would express great satisfaction, maybe ten would be thankful with another ten seemingly indifferent, but one might express significant dissatisfaction. When I came home for dinner that night, Martha would hear about that one unhappy camper. It took years for me to learn to see the bigger landscape in my role as a physician. I can see I need to keep learning this in politics.

I drove north first and took down the big sign west of the highway. A couple folks honked and waved with a thumbs-up.  A contractor I have known for years pulled over and helped me pull the T posts. “Congratulations!” he grinned and shook my hand, his ¾ ton diesel pickup idling behind us.

“We’re staying busy.” We didn’t talk politics. I know he lives outside this district. But his good wishes and warm handshake made me smile.

The last signs were south of town. These posts were in rocky gravel so I was working hard to get them out when the business owner came out. He too congratulated me, but soon we were talking about his plans for expansion, his family. As I put the posts in the back of the pickup he said, ”You know, I always thought I was a Republican. But I’ve known you for twenty years so I voted for you. I remember the first time you ran and I saw you were a Democrat it really surprised me. Him too.” he gestured at a county commissioners sign. “I guess I vote for the person if I know ‘em. Sometimes I don’t vote for anybody if I don’t know ‘em. It’s kinda hard when you don’t know ‘em.”

Yes it is hard. How do you get folks to trust you, to know you, in this age of national media and sound bites? I drove home with a good feeling but no real answers. I get to keep doing the work and trying to figure this out.